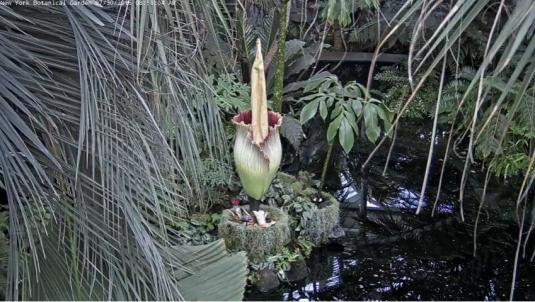 The bloom of the NYBG Amorphophallus titanum, known to many as the corpse flower, is a horticultural jewel 10 years in the making. Each day of careful tending and feeding has led up to this moment: a brief yet glorious window in which the enormous plant (up to eight feet high) will unfurl, displaying the striking red interior and uncanny scent to which it owes its name. This is the first time that a blooming titan-arum has been put on display at the Garden since 1939, and this unique plant is unpredictable—it may be in flower for only one or two days.

Whenever this rare plant blooms, it causes a sensation. Maybe it’s because it is known for having one of the largest inflorescences in the world, but more likely it’s because of the infamous odor it releases during its brief 24–36-hour peak, like the smell of rotting flesh, the reason the plant is more popularly known as the corpse flower.