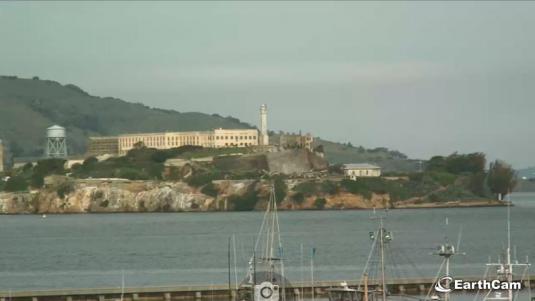 Alcatraz Island is located in the San Francisco Bay, 1.5 miles (2.4 km) offshore from San Francisco, California, United States.The small island was developed with facilities for a lighthouse, a military fortification, a military prison (1868), and a federal prison from 1933 until 1963

San Francisco Bay is a shallow estuary that drains water from approximately 40% of California. Water from the Sacramento and San Joaquin rivers, and from the Sierra Nevada mountains, passes through the Bay to the Pacific Ocean. Specifically, both rivers flow into Suisun Bay, which flows through the Carquinez Strait to meet with the Napa River at the entrance to San Pablo Bay, which connects at its south end to San Francisco Bay. However, the entire group of interconnected bays is often called the San Francisco Bay.