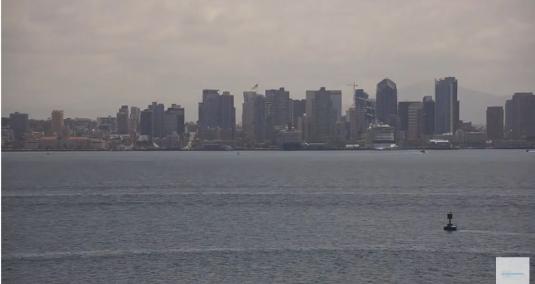 San Diego Bay is a natural harbor and deepwater port located in San Diego County, California near the U.S.–Mexico border. The bay, which is 12 miles (19 km) long and 1 to 3 miles (1.6 to 4.8 km) wide, is the third largest of the three large, protected natural bays on California’s entire 840 miles (1,350 km) long coastline after San Francisco Bay and Humboldt Bay.

San Diego is a city in the U.S. state of California on the coast of the Pacific Ocean, approximately 120 miles (190 km) south of Los Angeles and immediately adjacent to the border with Mexico. With an estimated population of 1,425,976 as of July 1, 2018, San Diego is the eighth-largest city in the United States and second-largest in California. It is part of the San Diego–Tijuana conurbation, the second-largest transborder agglomeration between the U.S. and a bordering country after Detroit–Windsor, with a population of 4,922,723 people. The city is known for its mild year-round climate, natural deep-water harbor, extensive beaches, long association with the United States Navy, and recent emergence as a healthcare and biotechnology development center.