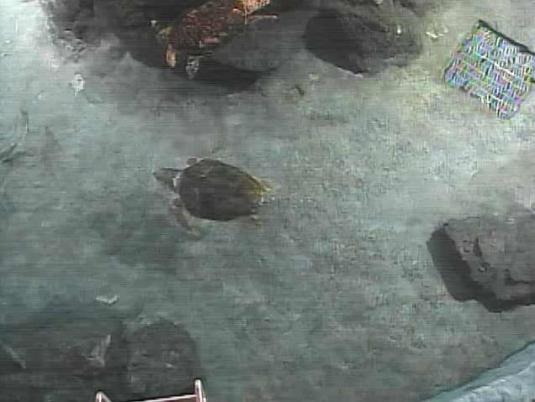 Port of Nagoya Aquarium is only the place where the breeding of loggerhead turtle is successful in Japan. The aquarium has led protection programs of the Loggerhead turtles. Artificial beach was prepared for the turtles for nesting in the aquarium. It took time for the sea turtle to start using the beach for nesting

The sea turtles are now monitored by 2 cameras in water and 3 cameras on the beach. Their mating season is February, then the female turtles come up to beach from late April to June during night for nesting and lay eggs 4 or 5 times in one season. About 100 eggs are laid each time. The eggs are collected for artificial incubation in the Turtle Breeding Research Centre. The baby turtles are taken care after hatching, and the half of them are released to the open sea from off coast of Boso Peninsula.