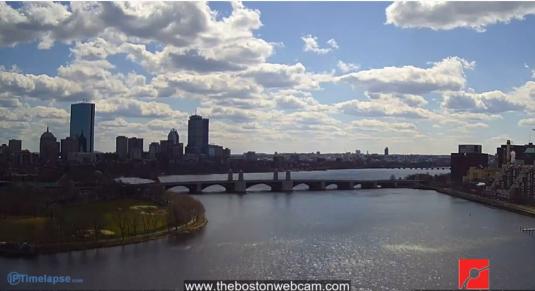 The Longfellow Bridge is a steel rib arch bridge spanning the Charles River to connect Boston‘s Beacon Hill neighborhood with the Kendall Square area of Cambridge, Massachusetts. The bridge carries Massachusetts Route 3, US Route 3, the MBTA Red Line, bicycle, and pedestrian traffic. The structure was originally known as the Cambridge Bridge, and a predecessor structure was known as the West Boston Bridge; Boston also continued to use "West Boston Bridge" officially for the new bridge. The bridge is also known to locals as the "Salt-and-Pepper Bridge" due to the shape of its central towers

The Charles River (sometimes called the River Charles or simply the Charles) is an 80-mile-long (129 km) long river in eastern Massachusetts. From its source in Hopkinton the river’s mouth is northeast of its headwaters, though it follows a highly meandering route, doubling back on itself several times and traveling through 23 cities and towns before reaching the Atlantic Ocean at Boston. The Native-American name for the Charles River was Quinobequin, meaning "meandering".