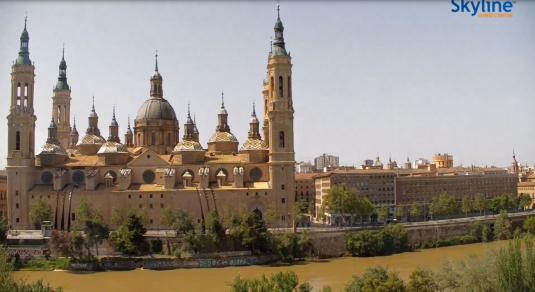 Zaragoza (also called Saragossa in English) is the capital city of the Zaragoza province and of the autonomous community of Aragon, Spain. It lies by the Ebro river and its tributaries, the Huerva and the Gállego, roughly in the center of both Aragon and the Ebro basin.

The Cathedral-Basilica of Our Lady of the Pillar (Spanish: Catedral-Basílica de Nuestra Señora del Pilar) is a Roman Catholic church in the city of Zaragoza, Aragon (Spain). The Basilica venerates Blessed Virgin Mary, under her title Our Lady of the Pillar praised as "Mother of the Hispanic Peoples" by Pope John Paul II. It is reputed to be the first church dedicated to Mary in history.