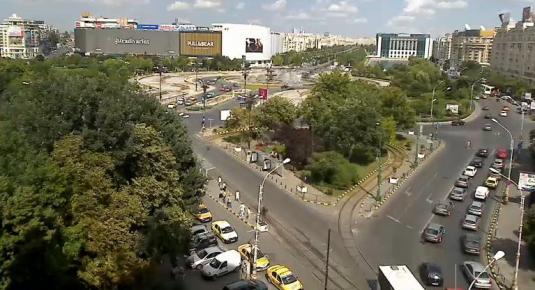 Piața Unirii Unification Square in English) is one of the largest squares in central Bucharest, located in the center of the city where Sectors 1, 2, 3, and 4 meet. It is bisected by Unirii Boulevard, originally built during the Communist era as the Boulevard of the Victory of Socialism, and renamed after the Romanian Revolution of 1989.

The Unirii square is a significant transport hub, containing the Piața Unirii metro station and a major interchange for RATB buses; there is also a tram terminal near the southwest corner. The Unirea shopping Center the Cocor department store and a large taxi rank are located on the east side of this square, while Hanul lui Manuc is on the north side, near the northeast corner. The centre of the square boasts a small park and fountains which are particularly popular with commuters and passers-by in the torrid summer months