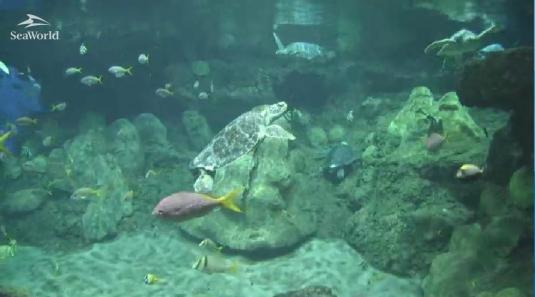 SeaWorld San Diego is an accredited member of the Association of Zoos and Aquariums  Seven sea turtle species swim in temperate and tropical seas worldwide. These include the green, loggerhead, hawksbill, olive ridley, Kemp’s ridley, flatback, and leatherback sea turtles. Sea turtles have four flippers for swimming and, except for the leatherback turtle, a protective shell. Although it lacks a shell, the leatherback’s huge size (it can weigh up to 2,000 pounds) and thick, oily skin let it travel into colder waters than any other type of sea turtle. Both male and female sea turtles can travel thousands of miles from feeding grounds to the waters just off nesting beaches. The adult female sea turtles return to land when they crawl out onto the nesting beaches to lay their eggs.