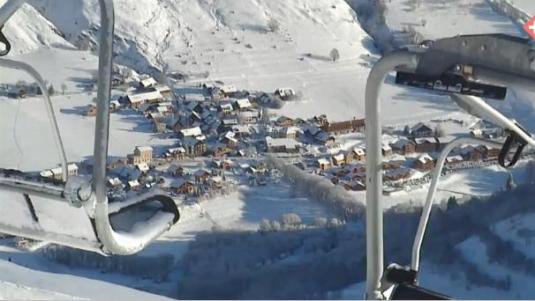 Saint-Sorlin-d’Arves is a commune in the Savoie department in the Rhône-Alpes region in south-eastern France.  Saint-Sorlin-d’Arves is a ski resort, part of the larger Les Sybelles area. Gaston Maulin’s project of linking St Sorlin with the La Toussuire and Le Corbier ski resorts has created Les Sybelles, an area that ranks high in the list of the largest French ski areas, with over 300 kilometres of intermediate level skiing. The St Sorlin area has over 120 kilometres of pistes and is generally considered to have the best runs and be the best placed sector of the Sybelles area. With village slopes starting at 1550 metres and a current maximum lift altitude of 2620 metres there is normally good snow until the end of April but there are also plenty of strategically placed snow cannons. St Sorlin has a 16 km cross country ski trails, 4 green, 11 blue, 9 red and 2 black runs with beginners slopes in the village.