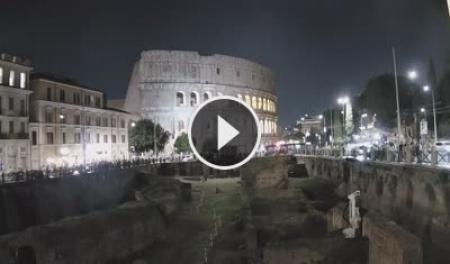 The Ludus Magnus (also known as the Great Gladiatorial Training School) was the largest of the gladiatorial schools in Rome. It was built by the emperor Domitian (r. 81–96 C.E.) in the late first century C.E., alongside other building projects undertaken by him such as three other gladiatorial schools across the Roman Empire. The training school is situated directly east of the Colosseum in the valley between the Esquiline and the Caelian hills, an area already occupied by Republican and Augustan structures. While there are remains that are visible today, they belong to a reconstruction that took place under the emperor Trajan (r. 98–117) where the Ludus plane was raised by about 1.5 metres (4 ft 11 in). The Ludus Magnus was essentially a gladiatorial arena where gladiators from across the Roman Empire would live, eat, and practice while undergoing gladiatorial training in preparation for fighting at the gladiatorial games held at the Colosseum.