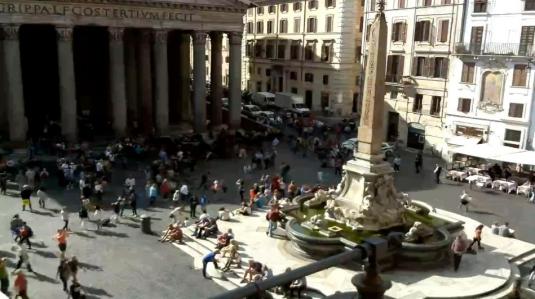 The Pantheon (/ˈpænθiən/ or US /ˈpænθiɒn/;Latin: Pantheon,from Greek Πάνθεον meaning "every god") is a building in Rome, Italy.  The Pantheon Dome building is circular with a portico of large granite Corinthian columns (eight in the first rank and two groups of four behind) under a pediment. A rectangular vestibule links the porch to the rotunda, which is under a coffered concrete dome, with a central opening (oculus) to the sky. Almost two thousand years after it was built, the Pantheon’s dome is still the world’s largest unreinforced concrete dome

The Piazza della Rotonda is a piazza (city square) in Rome, Italy, on the south side of which is located the Pantheon. The square gets its name from the Pantheon’s informal title as the church of Santa Maria Rotonda.