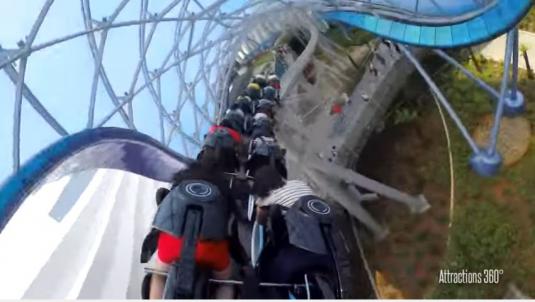 Watch this Live Tron Roller Coaster VR 360 Cam Video Ride at the Shanghai Disneyland Theme Park on the outskirts of the City of Shanghai when wearing a VR Immersive Headset with your smartphone device.  To view this filmed LIVE Tron Lightcycle Power Run VR 360 Panorama Roller Coaster Ride camera video on your computer – watch on You Tube Virtual Reality Channel

TRON Lightcycle Power Run is a semi-enclosed launched steel roller coaster attraction at Shanghai Disneyland. Based on the Tron series, the attraction takes guests on a ride through the Grid on their own light cycle.The coaster’s track takes riders inside and outside the attraction’s building, reaching speeds of over 60 miles per hour (97 km/h)—the fastest for any Disney roller coaster. The ride debuted along with the rest of the park on June 16, 2016.