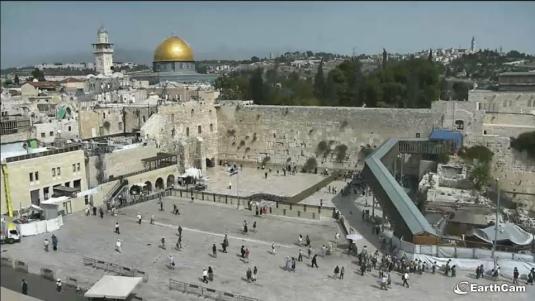 The Western Wall, Wailing Wall or Kotel HaKotel HaMa’aravi; Ashkenazic حائط البراق‎ Ḥā’iṭ Al-Burāq the Buraq Wall, or al-Mabka: the Place of Weeping) is located in the Old City of Jerusalem. It is a relatively small segment of the structure which originally composed the western retaining wall of the Second Jewshish Temple atop the hill known as the Temple Mount to Jews and Christians, originating in its biblical Hebrew name, Har HaBáyit (הַר הַבַּיִת), lit. "Mount of the House [of God]", and to Muslims as the Noble Sanctuary, al-Haram ash-Sharīf (الحرم الشريف).

The Temple Mount is the holiest site in Judaism and is the place to which Jews turn during prayer, and the Western Wall is considered holy due to its connection to the Temple. Due to the rabbinic ban on praying on the Mount, the Wall is the holiest place where Jews are permitted to pray.

Jerusalem Hebrew: יְרוּשָׁלַיִlocated on a plateau in the Judean Mountains between the Mediterranean and the Dead Sea, is one of the oldest cities in the world. It is considered holy to the three major Abrahamic religions—Judaism, Christianity and Islam. Israelis and Palestinians both claim Jerusalem as their capital, as Israel maintains its primary governmental institutions there and the State of Palestine ultimately foresees it as its seat of power; however, neither claim is widely recognized internationally.