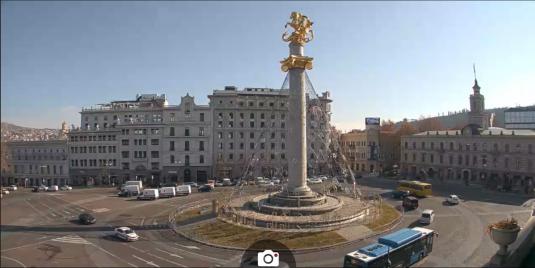 Abutting the north side of Freedom Square is a small open space with a fountain and a bust of Alexander Pushkin. Nearby the famous communist Kamo (Simon Ter-Petrossian) was once buried, but during Stalin’s rule his remains were moved to an undisclosed location.

Tbilisi City Hall is situated on the Square. Other buildings include the former Bank of Georgia head office and the Marriott International Tbilisi. The square will also accommodate the Old Tbilisi local government office, the building works of which are already started.

During the Soviet period, the square featured a large statue of Vladimir Lenin, which was symbolically torn down in August 1991. On November 23, 2006, the Liberty Monument depicting St George slaying the dragon, created by Zurab Tsereteli was unveiled in the same place.