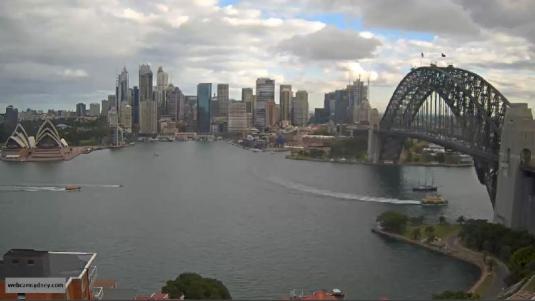 Circular Quay is a harbour in Sydney, New South Wales, Australia on the northern edge of the Sydney central business district on Sydney Cove, between Bennelong Point and The Rocks

The Sydney Harbour Bridge is a steel through arch bridge across Sydney Harbour that carries rail, vehicular, bicycle, and pedestrian traffic between the Sydney central business district (CBD) and the North Shore. The dramatic view of the bridge, the harbour, and the nearby Sydney Opera House is an iconic image of Sydney, and Australia. The bridge is nicknamed "The Coathanger" because of its arch-based design or is simply called "the Bridge" by Sydney residents.

The Rocks is an urban locality, tourist precinct and historic area of Sydney’s city centre, in the state of New South Wales, Australia. It is located on the southern shore of Sydney Harbour, immediately north-west of the Sydney central business district.