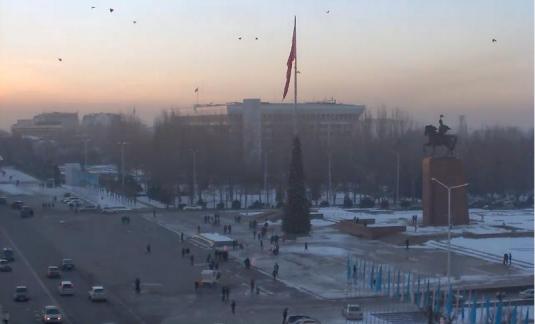 Bishkek City formerly Pishpek and Frunze, is the capital and the largest city of Kyrgyzstan. Bishkek is also the administrative centre of Chuy Province which surrounds the city, even though the city itself is not part of the province but rather a province-level unit of Kyrgyzstan.  Bishkek is situated at about 800 metres (2,600 ft) altitude just off the northern fringe of the Kyrgyz Ala-Too range, an extension of the Tian Shan mountain range, which rises up to 4,855 metres (15,928 ft) and provides a spectacular backdrop to the city. North of the city, a fertile and gently undulating steppe extends far north into neighboring Kazakhstan. The Chui River drains most of the area. Bishkek is connected to the Turkestan-Siberia Railway by a spur line.