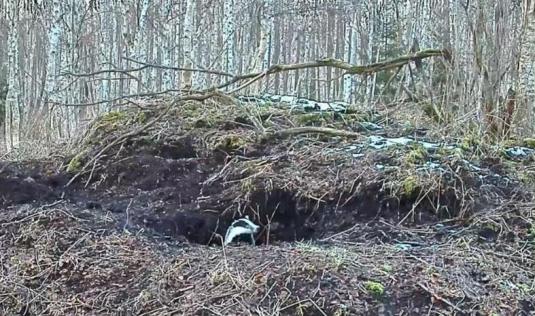 Badgers are short-legged omnivores in the family Mustelidae  Badgers have rather short, fat bodies, with short legs for digging. They have elongated weasel-like heads with small ears. Their tails vary in length depending on species; the stink badger has a very short tail, while the ferret badger’s tail can be 46–51 cm (18–20 in) long, depending on age. They have black faces with distinctive white markings, grey bodies with a light-coloured stripe from head to tail, and dark legs with light coloured underbellies. They grow to around 90 centimetres (35 in) in length including tail. The European badger is one of the largest; the American badger, the hog badger and the honey badger are generally a little smaller and lighter. The stink badgers are smaller still, and the ferret badgers are the smallest of all. They weigh around 9–11 kg (20–24 lb) on average, with some Eurasian badgers weighing in at around 18 kg (40 lb)   The behaviour of badgers differs by family, but all shelter underground, living in burrows called setts, which may be very extensive. Some are solitary, moving from home to home, while others are known to form clans called cetes. Cete size is variable from two to fifteen.