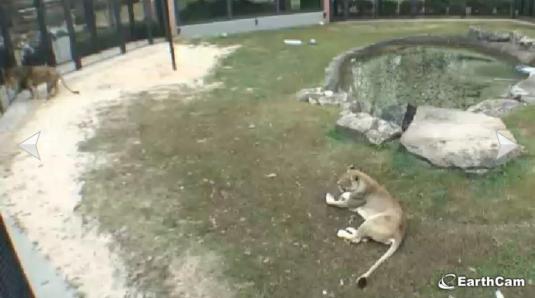 The University of North Alabama (UNA) is a coeducational university located in Florence, Alabama, and the state’s oldest four-year public university. Occupying a 130-acre (0.5 km2) campus in a residential section of Florence, UNA is located within a four-city area that also includes Tuscumbia, Sheffield and Muscle Shoals

The University of North Alabama boasts the only live Lion mascots in the country living on a college campus. Leo III and Una, born on November 18, 2002,  reside on the UNA campus in the 12,764 square-foot George H. Carroll Lion Habitat and carry on a tradition that has covered more than 40 years. On July 22, 1974, former UNA president Dr. Robert M. Guillot brought a 35-pound lion cub to the campus and Leo spent the next 14 years “roaring” the school to victory. The original Leo died on Jan. 20, 1988, and a great outpouring of support from the Shoals community resulted in Leo II being brought to UNA in July of 1988. Leo II lived in the compound that once housed  the original Leo and  grew to a weight of more than 600 pounds at eleven years of age. In 1997, Leo II was selected as the nation’s "Second Best Mascot" by Sports Illustrated. He died in February of 2000. Approaching their 12th birthdays, Leo III and Una are exhibited seven days a week from approximately 8 a.m. until 5 p.m. (weather conditions permitting), unless they are appearing in local venues.