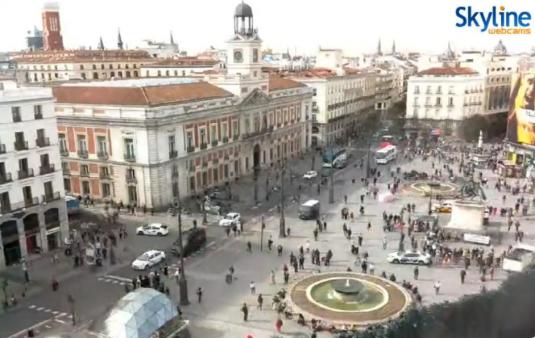 The Puerta del Sol (Spanish for "Gate of the Sun") is one of the best known and busiest places in Madrid. This is the centre of the radial network of Spanish roads. The square also contains the famous clock whose bells mark the traditional eating of the Twelve Grapes and the beginning of a new year. The New Year’s celebration has been broadcast live on national television since December 31, 1962.  The Puerta del Sol City Square contains a number of well known sights both domestically and internationally associated with Spain. On the south side, the old Post Office serves as the office of the President of Madrid, the head of the regional government of the Autonomous Community of Madrid (not to be confused with the Madrid City Council, which is housed elsewhere). Also on its south side, the square holds a mounted statue of Charles III of Spain, nicknamed "el rey alcalde" ("the mayor-king") due to the extensive public works program he set in motion. The famous Tío Pepe lighted sign is above the square’s eastern building between the Calle de Alcalá and the Carrera de San Jerónimo. Also on the east side lies a statue of a bear and a madrone tree (madroño), the heraldic symbol of Madrid.